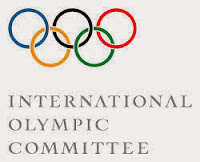 There once was a country that was due to host  the next  Winter Olympic Games.  This nation had worked very hard  to secure the games.    This  nation's leader saw it a  matter of both national and personal pride.  His nation  was emerging from  period of  economic  and political upheaval  stemming from  the collapse of it's former imperial system and the resulting loss in prestige.

Less than a year  out  from those upcoming games,  this nation passed a host of new laws which specifically targeted  one minority group, painting a picture of this group as a threat to children, the nation, and society at large.   the new laws  stated:
As a result of these new laws being passed, groups of young thugs were reportedly emboldened into seeking out members of this minority group and harassing, beating and in some cases, torturing and even killing them.

The response from the International Olympic Committee (IOC) at the time ..... Silence.   Not one word of protest was heard, and a year later in 1936, just a few months after the passage of the 1935 Nuremberg Laws, targeting Germany's Jewish population; The Winter Olympics were held in Garmisch-Partenkirchen Germany, under the watchful gaze of Germany's aggressive, charismatic leader, Adolf Hitler.

Funny how history often repeats itself ... Fast forward 78 years to 2013. We are less than a year out from the 2014 Winter Olympics in Sochi, Russia. An Olympic Games viewed by many as Russia's re-emergence on to the world cultural stage since the collapse of the Soviet Union, and clearly a point of personal pride for Russia's "macho-man" President, Vladimir Putin.

Russia's parliament has unanimously passed a federal law banning gay "propaganda" amid a Kremlin push to enshrine deeply conservative values that critics say has already led to a sharp increase in anti-gay violence.

The law passed 436-0 on Tuesday, with just one deputy abstaining from voting on the bill, which bans the spreading of "propaganda of non-traditional sexual relations" among minors. The law in effect makes it illegal to equate straight and gay relationships, as well as the distribution of material on gay rights. It introduces fines for individuals and media groups found guilty of breaking the law, as well as special fines for foreigners.

Minutes after passing the anti-gay legislation, the Duma also approved a new law allowing jail sentences of up to three years for "offending religious feelings", an initiative launched in the wake of the trial against the anti-Kremlin punk band Pussy Riot. The two laws were widely criticised by Russia's marginalised liberal and human rights communities and come amid a wider crackdown against independent civil activity in the country. 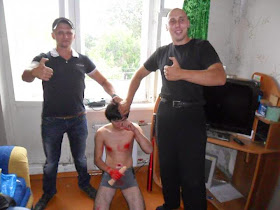 Oddly enough their idea of fighting pedophiles targets exclusively male teenagers who respond to the same-sex personal ads and show up for a date. Captured victims are bullied and often tortured while being recorded on video.  These self-proclaimed "crime fighters" perform their actions under the broad day light, often outside and clearly visible to general public that indifferently passes by or even commend them.

Video recordings of bullying and tortures are freely distributed on the Internet in order to out LGBT teens to their respective schools, parents and friends. Many victims were driven to suicides, the rest are deeply traumatized.    So far Russian police took no action against these "movements" even though Russian criminal code was clearly violated and despite numerous complaints from parents, victims and LGBT activists.
-----------------------------------------------------------
Imagine for one moment if Russia's new laws were targeting Blacks, or Asians, or Women, or even Christians. Imagine groups of thugs using social media to lure any of those aforementioned groups into traps where they were beaten and tortured The global outcry would be deafening.

The list of nations  boycotting the games in Sochi, would be so long that the IOC would have moved so fast to pull the games out of Russia,  as to make President Putin's head spin.  Yet just like with the Jews in 1935, to target Gays and Lesbians in 2013 garners barely a shrug from the International Olympic " family". Instead we get this:

The International Olympic Committee said Friday that athletes and visitors attending the 2014 Sochi Games in Russia will not be affected by anti-gay legislation passed last month.
"The IOC has received assurances from the highest level of government in Russia that the legislation will not affect those attending or taking part in the Games," according to the statement emailed to USA TODAY Sports.
The IOC also said: "The International Olympic Committee is clear that sport is a human right and should be available to all regardless of race, sex or sexual orientation. The Games themselves should be open to all, free of discrimination, and that applies to spectators, officials, media and of course athletes. We would oppose in the strongest terms any move that would jeopardise this principle."
Did you catch that? The response from the IOC is not that the laws in question are horrific
and wrong, but rather; "Oh don't worry... Putin has promised that he probably won't enforce these laws against people coming to Russia for the Olympics." Not that the brutal targeting and torture of LGBT youth in Russia must stop, but rather all those Gay Olympians and fans from outside Russia needn't worry about their own safety.

Now I hear many of you saying; "C'mon Dave! You are not really equating Russia in 2013 to Nazi Germany in 1935 are you ?"  Yes I am.   Am I equating Vladimir Putin with Adolf Hitler? Yes I am.   Am I saying the skinhead thugs who are attacking LGBT teens in Russia are the same as the Nazi supporters in the 1930's who attacked Jewish homes, shops and synagogues? Yes I am.

When you use the power of the state to scapegoat one minority for no other reasons than bigotry, and political expedience; When you allow a minority group to be terrorized, brutalized and marginalized for no other reason than they cant fight back; When you brand a minority group as less than human, and therefore deserving of inhuman treatment;   When you do these things, you are no different than the Nazi Brownshirts of Krystalnacht and the regime of Adolf Hitler that urged them on.

The IOC owes it to history, it owes it to the memory of those who could have possibly been helped, in 1935 when the Olympic Family was in a position to say this is wrong. The IOC owes it the LGBT citizens of not only Russia, but everywhere, to this time, do what is right, to live up to the words of the Olympic motto and take a stand for human rights.

The 2014 Winter Olympic Games must be moved out of Russia, and these modern day Anti Gay "Nuremberg Laws", must be loudly and unequivocally condemned.

Anything less, is just history repeating.

Authors Note - Special thanks to the incredible Stephen Fry for his support in getting this message out...
Dave at 8:58 AM